I 2019 marks as the Facebook 10th F8 Developer Conference at California where developers, creators, businessmen, entrepreneurs, innovators & investors have gathered for a 2 days event. The 5 biggest announcements from Facebook’s F8 developer conference keynote:

In this overwhelmed event, Facebook’s CEO Mark Zuckerberg emphasizes on the Facebook Privacy as the company has faced lots of criticism on this segment in the previous few months. Facebook is pushing hard to ensure the safety of the user’s data on social media. To ensure the data privacy on Facebook, Mark Zuckerberg has decided to revamp the whole platform as well as its other products.

Facebook is being Redesigned to focus more on Groups & Events ?

Facebook has announced the following major upgrades on its platform:

Facebook will highlight the groups & events tabs and will offer personalized feeds to the group members.

The desktop, Android & iOS apps will get revamped to a very clean & white colourless design similar to what Google has applied on its various products like Gmail, PlayStore, and all other Google apps.

Facebook has planned to expand the social circle, where it will include a feature called Meet New Friends, which will allow you to get connected to the other people who have something in common with you like colleagues or school friends.

Apart from the above updates, Facebook earlier this year also has planned to integrate Messenger, Instagram & WhatsApp.

Instagram is one of the most popular products of Facebook to showcase the best photography and soon you will notice the new features with stunning usability.

Facebook is updating the Camera interface of the Instagram by adding a create mode which will make easier to propagate the content instead of the traditional manner.

Instagram is expanding the shop feature which will allow users to buy the products from inside the app itself.

A testing feature is under the trial where a person can hide their likes, it will help you to focus on the photos of yours rather than concentrating on their photo likes. This feature is being tested in the Canada region and will get rolled out in other countries if it gets popular.

Instagram also planned to launch the Donation Sticker where you can send the relief funds within the app. The funds will be then forwarded to the NGOs or the beneficial trustee party. Facebook plans to emphasize the focus on close friends.

You can set the status of the messages with people to whom you trust.

It is getting redesigned and repacked so that it can use less space on the phone.

The company has a focus to upgrade the speed and ease of use.

Oculus Quest & Oculus Rift S are two headsets that replace the external tracking cameras and provide the experience of inside-out system. The price of Quest & Rift s would be $399. Quest is a self-contained console that is targeted to large audiences. Rift S is the updated version of the Oculus Rift which adds inside out features, new design and lot more to experience the new era of the digital world. 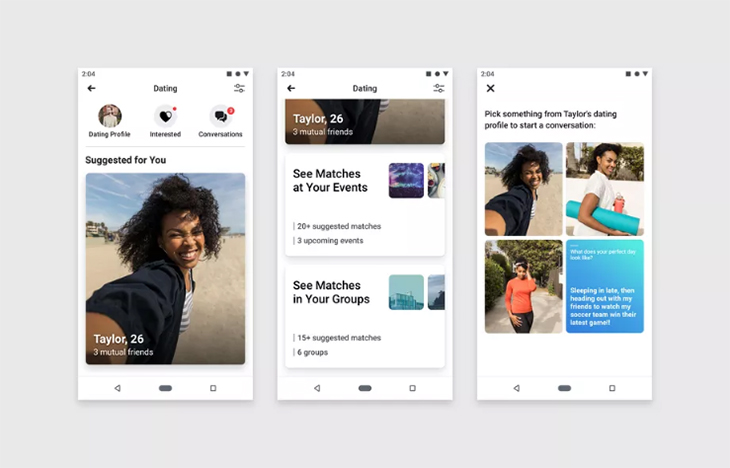 It is now officially announced at the F8 Developer Conference 2019, Facebook dating will get expanded to 14 countries which introduce a new feature called Secret Crush… It seems really exciting and this is what are you expecting… It allows adding the secret list of friends on which you get attracted. If they are also using the secret crush and add you into their list, then Facebook will notify both and make the match.

We are expecting more to come out of the box and soon you will experience the different style of your favorite social media platform… Experience F8 Online, Keep Facebooking!!